I believe in legend...

April 08, 2013
Anitha Santhi is an Ecological Scientist originally from Kerela. She is the main force behind Tamil fishermen and villagers opposing the construction of nuclear power project in  Tamil Nadu. Her book titled NO, which can be seen in her hands not only moved millions to oppose the project but also created  tides of supporters among natives and non-natives, Indians and non-Indians, writers and readers, etc.

Such is the force of dedication, selflessness  and expertise. I have all the respect for this unsung legendary lady. 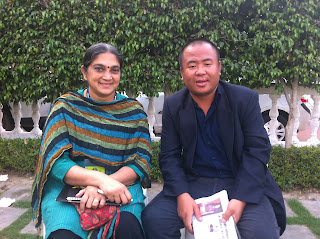 PaSsu said…
Amen. I loved the evening we spent with this legend. So down to earth, so graceful! When you are done with her book, you should pass me the copy because I didn't get one!

Susan Andrews said…
Oh yes, I have heard of her struggle. I even saw TV footage of the people in India protesting against the nuclear power plant. I think she is doing very good job. If she is reading this comment, I have millions prayers and wishes for SANTHI. Great job!!!!!!

Popular posts from this blog

God waited for long time because documents had to be located...

June 17, 2017
Thank you all for giving truth a chance. It deserved a hardlook.  I removed the last post because someone had uploaded documents online.   My family remains indebted to everyone who provided me with fresh openings.
582 comments
Read more

October 17, 2013
Just as Royal Institute for Governance and Strategic Studies took helm to train world class leader in Bhutan, I am left determined to ask some pertinent questions that has been chiseling my mind for very long time to one of the privileged candidates of RIGSS, the Chief Executive Officer of Food Corporation of Bhutan. The question concerns ethics in business and moral responsibility as Chief Executive Officer of one of the oldest companies in Bhutan.    I bring forth this question because I could not keep quiet and it concerns ethical issues which touches the depth of human nature.  As a writer, I have always sought for refuge in my conscience. After having tolerated the swamp for very long time, I thought there are million reasons to ponder upon this case. Mr. Champay joined the service of FCB in March 1975 after completing class IX from Tashigang Central School. On August 31st, 2012, he reached superannuation age of 58 years and completed 37 years of service. As per the FCBL S
816 comments
Read more