September 25, 2012
(This series is dedicated to my friend Susan and her husband James Andrew who are currently in Bhutan. I guess they must be among the crowd watching Thimphu Tshechu these days.  I hope they have a pleasant stay in Bhutan.)

Drung Drung Gyelchog and the Demons of Paro

As soon as Drung Drung Gyelchog, one of the great grandsons of Phajo Drugom Zhingpo, settled down on the cliff edge at Hungrel in Paro (where the present day Rinpung Dzong is located), he summoned all the local deities and spirits in whole of Paro valley. The local deities and spirits all pledged their allegiance to him except for one called the spirit from Drelpo Jika who continued to harm people, their cattle and other properties.

He used medium and possessed people. Through the medium, he demanded sacrifices and offerings which he gluttonously killed cattle and wasted precious wealth of the people. Cattle in Bhutan are considered wealth because bulk of our people are farmers.

It continued for a very long time until one day when a person from the area got possessed by the spirit from Drelpo Jika. The spirit threatened the life of his medium or the person whom he had possessed despite many rituals, libation and sacrifices being performed. So the family of the possessed person begged Drung Drung Gyelchog to help them get rid of the spirit.

Drung Drung Gyelchog summoned  the spirit from Drelpo Jika along with the person who was possessed. He first separated them. Then he made the spirit face him in person and chased him as far as the western end and warned him of dire consequences which the spirit was forced to oblige.

To help the possessed person recover from mental turmoil and regain his consciences and energy, the person who was possessed and used as medium was sent to the other extreme with all provisions of food and clothing. He was to remain there for some months.

Then the lama conducted other rituals for the family and blessed the whole village. Ever since then, the village has been free of any malignant spirits.

Paro Rinpung Dzong not only commands over the whole of fertile area but also is a feast for the eyes. It has the power to bless the faithful and is the monument of heaps of jewels and precious stones.

As much as it is splendid, the history of its construction is even more appealing.

Drung Drung Gyelchog was taken with remorse to see that many factions of differing religious sects who had settled down in the area in and around Paro before him were all engaged in conflict with each other to gain power and control instead of helping innocent people. Each Lama tried to prove his supremacy by waging war against the other which was not so Buddhist.

So Drung Drung Gyelchog decided to leave Paro than stay in such war torn area. When people knew that he was leaving, they were very sad. So they all got together and forced warring parties to seek truce. Then they went to beg lama to stay back. There they offered the cliff where the Dzong is built now to Drung Drung Gyelchog and requested him to build his palace and settle there permanently.

The night that the people had come to beg him to stay back, he   had a vision where a deity in white clothes passed on the message from Guru Rinpoche to stay back. He took it as a good omen and agreed to the people’s request.

He immediately started building five-storied palace. His disciples and patrons of Chang and Drolpo all came and helped him during the day and in the night he was helped by the spirits and deities.

On one such occasion when he was using the service of the deities in ferrying the woods, his wife and some of the servants who considered themselves lucky to see miracle  saw huge trees rolling down from mountain top on its own. Some of the trees got stuck halfway and got planted there with visible leaves and fruits during Spring and Fall. Such was the power of Drung Drung Gyelchog. The trees are said to be visible still to this day above the Dzong.

Sometimes in 15th century, a Terton  ( treasure revealer) called Sherab Mebar happened to reach Haa from Kham in Tibet. He drank all the waters of the lake Nubtshonapatra and took out dung (trumpet), Nga (drum) and a pair of ramung (cymbals) from the lake bed. He also found a huge golden pillar which he requested a carpenter to curve it into a pillar to be used for building Paro Rinpung. The carpenter was told to take the shavings from the pillar as his remuneration for the work. However, the carpenter shaved too much from the pillar as his compensation. As a result, the lake escaped from the mouth of the Terton and started chasing him. Terton ran for his life. While running away, he threw first the drum and then the drumsticks. He also threw away the trumpet and a one portion of the cymbals until the diety Phola Mansang Chungdud appeared  to rescue the Terton at a place called Labdza of Tshellutsho.  Phola Mansang Chungdud negotiated the truce between the Terton and the angry deity of the lake. It was agreed that the Terton and his followers would never set their foot in Haa Shongana after that incident. Similarly, the deity of the lake agreed not to cross Labdza. This cut out all links between the people of Haa Shongana and Paro Pangmisa where Labdza is located. The other portion of the cymbal still exists today and is one of the main treasures of the Paro Rinpung Dzong.

Once a year it is taken out of the Dzong during annual Paro Tshechu for public to get blessing from it.

This agreement was however, defied later by a young man from Haa Shongana who happened to marry a girl from Paro Pangmisa. While going to Haa Shongana, the couple lost their infant child when they crossing a footbridge. The knot tying the baby wrapper is known to have loosened itself when they reached the middle of the bridge and the child was carried away by the river beneath. So the people of Paro and Haa started taking Ap Chungdud  very seriously.

Well, that’s a part of the story. So coming back to Paro Rinpung Dzong, it is said that it did not take long time for the lama to complete the Dzong. (Well, if I had deities and spirits working for me, I would like to build many buildings in Thimphu and Phuentsholing and live on sky high rents. That’s just my wishful thinking which will never happen). Well, The lama is known to have given teaching on Buddhism during morning hours of day and as such, people from far and wide came with bamboo baskets to work and get the teachings also. It is being said that the load became so light after they heard the teachings that ordinary people were able to ferry hundreds of basket loads of stones and mud in few hours.

The Dzong, although, was known as Hungrel Dzong when completed, was later called as Rinpung Dzong, the mountain of jewels after the cliff called Rinpungdrag, which was actually named by Guru Rinpoche.

(Paro Rinpung Dzong with Ta Dzong in the background during lunar eclipse. Picture Courtesy: Unknown Photographer. Every effort made to trace the photographer and seek permission. The writer would like to acknowledge the photographer.) 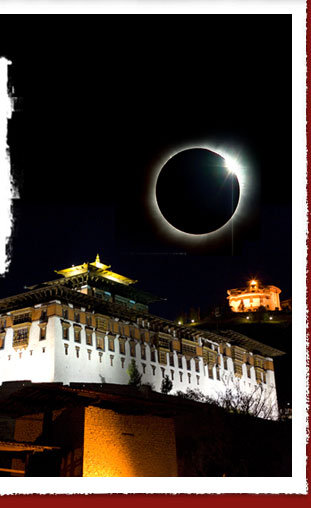 Susan Andrew said…
Hey Tshering, How have you been? Thank you so much for dedicating the post. We are happy to have a writer friend here in Bhutan. We sent you about twelve questions to answer in your gmail account. We look forward to meeting you soon. Please bring along your lovely son. Sonam Tshomo and her husband Karma are wonderful host. We will miss Bhutan when we go back.

དཔལ་ལྡན་བསོད་ནམས་ཉི་མས་སོ།། said…
This is a wonderful piece. its very informative. I too have a great interest in History and this piece comes to me as an additional knowledge.

In a separate story,I heard that terton Sherab actually wanted to build a Lhaknahg in Pangmisa with a golden pillar from Nobtsonapata.

anyways its was such a refreshing read.....

thanks for your story...

Tshering C Dorji said…
Thank you Susan, Kuenzang Thinley, Julie and Thiadrane for commenting on my posts and articles. I feel now that I am contributing to Bhutanese literature...at least I hope so.

Have a nice day.

I still can remember your moon like face gleaming as you presented Truck Parking Girl. It was really very beautiful. We look forward to reading such materials, if not better, in December.

Jennifer Nicholas said…
Truck parking girl is a beautiful work of literature, psychology and individual purpose. I am touched but I liked Half Inch Smile more. It was beyond words.

Please keep on writing. I wish you could post it here for other readers also but again there is a issue of printing rights. Anyway, great work.

Tshering C Dorji said…
Thank you Jennifer. I look forward to working with you in near future.
September 29, 2012 at 11:38 AM

Donna Alberta said…
I liked your closing note, " when an individual are faced with a situation to pour his emotion on bare ground, sometimes it makes sense to lay bare our socks and use it to sieve it so that we may find traces of happiness stuck somewhere among sweaty life."

I thought about it a million times. It melted in me. Thank you so much Tshering. I will see you again in Zurich this Winter.

Popular posts from this blog

God waited for long time because documents had to be located...

June 17, 2017
Thank you all for giving truth a chance. It deserved a hardlook.  I removed the last post because someone had uploaded documents online.   My family remains indebted to everyone who provided me with fresh openings.
582 comments
Read more

October 17, 2013
Just as Royal Institute for Governance and Strategic Studies took helm to train world class leader in Bhutan, I am left determined to ask some pertinent questions that has been chiseling my mind for very long time to one of the privileged candidates of RIGSS, the Chief Executive Officer of Food Corporation of Bhutan. The question concerns ethics in business and moral responsibility as Chief Executive Officer of one of the oldest companies in Bhutan.    I bring forth this question because I could not keep quiet and it concerns ethical issues which touches the depth of human nature.  As a writer, I have always sought for refuge in my conscience. After having tolerated the swamp for very long time, I thought there are million reasons to ponder upon this case. Mr. Champay joined the service of FCB in March 1975 after completing class IX from Tashigang Central School. On August 31st, 2012, he reached superannuation age of 58 years and completed 37 years of service. As per the FCBL S
816 comments
Read more