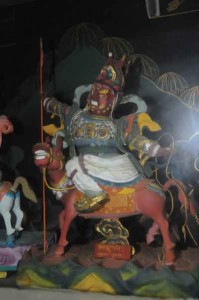 (This series is dedicated to Kaybu-Lu-Tsan, deity of Jakar Dzong.)

In Tsangtoed or upper Tsang in Tibet, there was a couple called Mepo Namtse and Sa Tsan. They had a son called  Kay Jetchen who was married to a woman called Kay Dak Tsunmo. Kay Jetchen and Kay Dak Tsunmo had three sons. The eldest was called Kay Tsey Muthra, the middle Kadrig Rimpa and the youngest was known as Kaybu Lu Tsan.

Kaybu Lu-Tsan was red faced and had a ferocious look. He wore many precious stones and rode dark red horse. He also had a red dog who followed him wherever he went. Kaybu Lu Tsan was a brave and courageous man. However, he was very violent  and picked up fights  even with demons and gods. He was also a good athlete and a sharp shooter. He spent most of his time either gambling or sporting.

So it is said that when they grew up, their parents made them what they wanted  to become. The eldest became local leader while the middle one inherited properties and became businessman. However,  Kaybu Lu Tsan was given a pair of dice.

It is said that he gambled with everyone and won many properties. When the people around him  had lost everything, he challenged the gods. The gods refused to gamble with him except one called Lha Ngyen Khu Dren who agreed to play dice with him. During the gamble, the god Lha Ngyen Khu Dren lost everything so he went to Tenpa sherab, another god to seek help. Tenpa Sherab advised him to conduct some rituals and gamble again. This time Lha Ngyen Khu Dren  staked his five sense organs and his heart and also asked Kaybu Lu-Tsan to do the same. While playing, Kaybu Lu Tsan lost and had to prepare to die to give away his sense organs and his heart. Kaybu Lu Tsan doubted foul play . So, before his death, he requested his attendant to bury his other body parts in all direction so that he could take revenge upon the gods. As he wished, he was reborn as the king of the haunting spirits who waged war against the gods. The people suffered while the gods and the devil had war so the God Tenpa Sherab negotiated the truce between the gods and Kaybu Lu Tsan and later subdued him making him the protector of dharma.